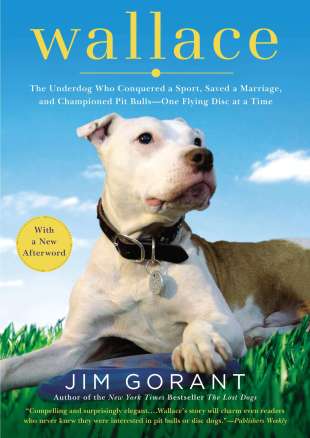 “Compelling and surprisingly elegant […] Wallace‘s story will charm even readers who never knew they were interested in put bulls or disc dogs.”
— Publishers Weekly

Today, Wallace is a champion.  But in the summer of 2005, he was living in a shelter and had a reputation as a “problem” dog, labeled unadoptable and untrainable.  Then Andrew “Roo” Yori entered the picture.  Roo knew immediately Wallace was something special. And not a moment too soon.  Roo learned Wallace was scheduled to be put down.  Frantic, Roo and his wife Clara fought to keep Wallace alive until they could adopt him.

Roo recognized Wallace needed a mission, and serendipity led them to the world of competitive Frisbee dogs.  Pit bulls, however are everything most disc dogs aren’t:  large, heavy with thick muscles and not exactly graceful.  Regardless, Roo knew Wallace had talent.  Overcoming everything from injuries to prejudice against the breed, the unlikely pair found success beyond anyone’s imagining. Wallace is a moving story that will capture the hearts of dog lovers and help restore this popular breed’s unfairly tarnished reputation.